Listen to "Bassem Sabry", the first track off "Aureate Gloom"

This is the first (and pretty exciting, I might add) excerpt from Aureate Gloom, which is set to be released on March 3rd. As usual, you can pre-order it (along with a nifty shirt) from Polyvinyl.
Posted by The Booty Patrol at 12:11 PM No comments:

Aquarium Drunkard celebrated the release of Lousy with Sylvianbriar with a brand new acoustic session. Unfortunately there is no new material, but three new covers (here's the comprehensive list of oM covers, thanks to Matt at You Ain't No Picasso). Click here for the three songs and Kevin's explanations as to why he chose them.

The Huffington Post just premiered the video for Fugitive Air. The video manages to find the perfect spot where old oM meets new oM, it's got that seventies folk vibe but it's also got the makeup and the fake blood and the nudity and the video projections. Not bad at all.

Yesterday Rolling Stone published the lengthiest interview of the new era so far. There isn't much that we didn't already know.

For those of you who don't check out TBP's facebook page or twitter account, you may not be aware that Lousy With Sylvianbriar has now officially become oM's most critically acclaimed record! I'm not the one saying it, Metacritic is.  It's probably got something to do with the fact that P4K finally decided to let it go and to review Elf Power's latest instead of Lousy With Sylvianbriar.

The Past Is A Grotesque Animal

of Montreal: The Past is a Grotesque Animal from jason miller on Vimeo.

Lousy With Sylvianbriar up for pre-order, listen to the first single 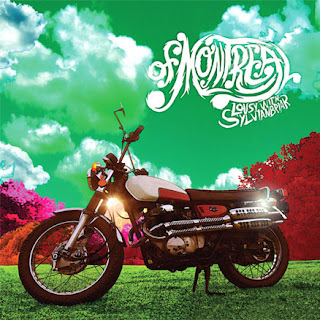 Lousy With Sylvianbriar has an artwork, a release date, eleven songs and a first single, and a pre-order page on Polyvinyl's website... It'd be easy to say that Fugitive Air harkens back to the first few of Montreal albums, but on my third listen, I actually think of it as an alternate route the band might have taken after Aldhils Arboretum.
Posted by The Booty Patrol at 8:12 PM No comments: